what is better than going on a trip out in nature after a hard working week and hike your way through breathtaking mountains and peaceful surroundings to charge your battery? does something come up to your mind? no? well then montserrat mountain in spain might be the destination for your next weekend trip. it is an ideal place for a trek, striking with a perfect balance of beauty and a rich history. its unique geological structure was formed over the 65 to 35 million years. 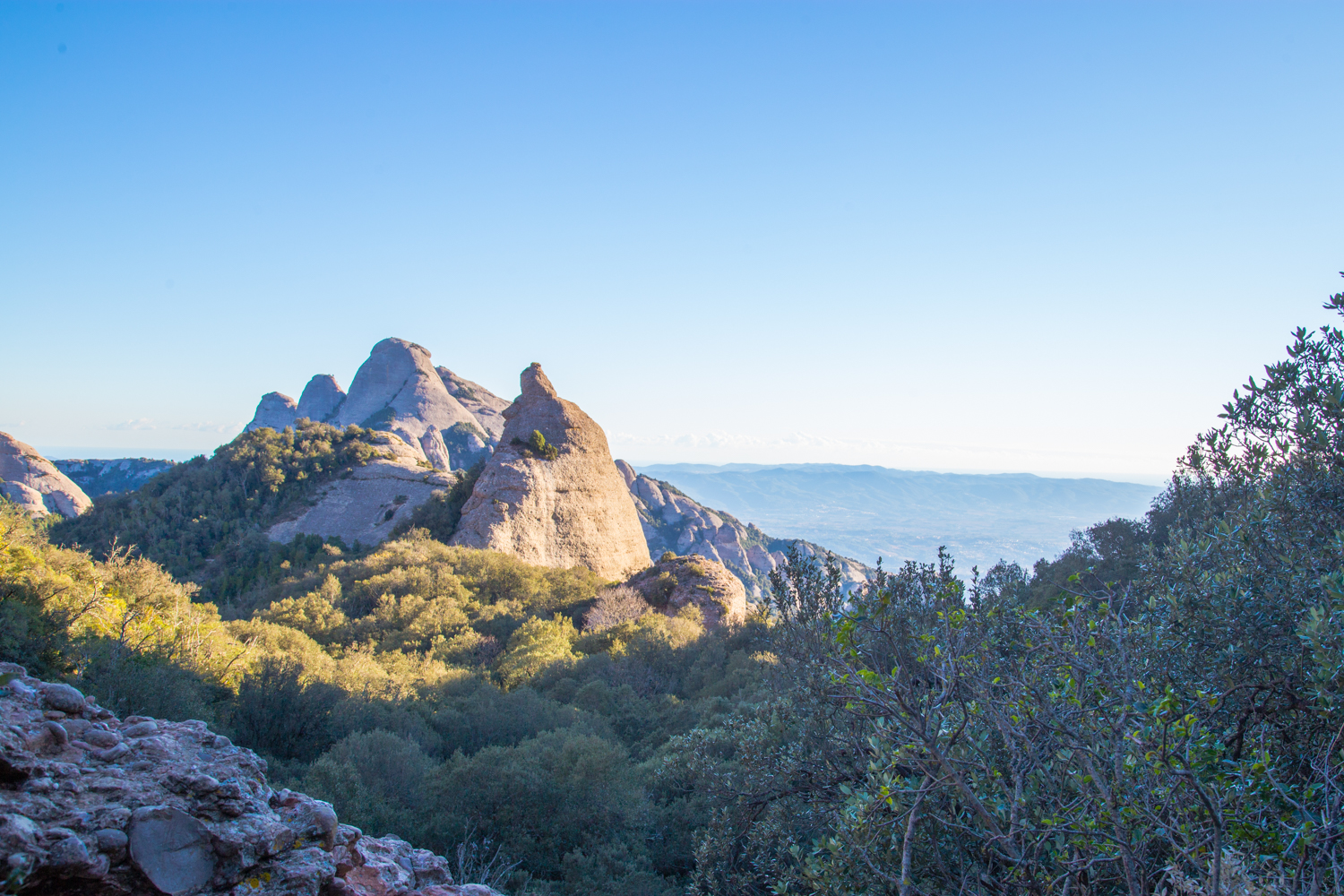 composed of cobblestone conglomerate, pebble and sand the strangely rounded rock pillars, shaped by wind, rain and frost, stand out and are one of europe’s most remarkable natural sights. the mountain of montserrat, which means “serrated mountain”, is a unique geological formation of such beauty that it has long captured the imagination of both local and foreign artists. richard wagner stayed there for some time and his opera parsifal uses montserrat as its backdrop. 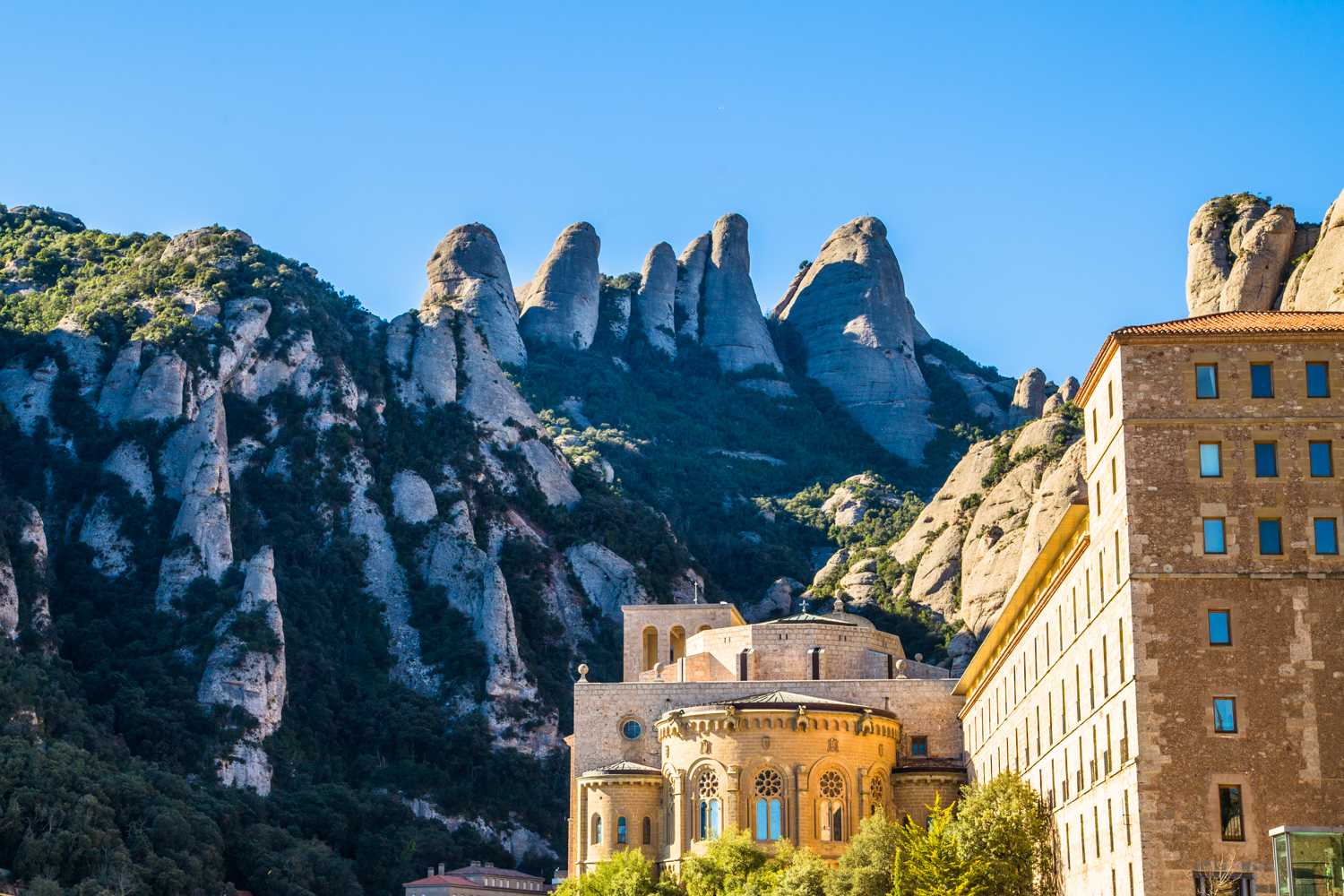 one of the most popular sights to see is benedictine monestir de montserrat, one of catalonia’s most important shrines. it can be found about halfway up the steep, barren mountain. there were ruins found from the 11th-century, but the new monastery on the site was built in the 19th century. ever since the benedictine monastery has been populated with monks that are dedicated to prayer and services at the sanctuary. today, there are around eighty monks. this monastery is composed of the chapter house, the neoromanic cloister, and the refectory, reflecting an architectural style, renovated in 1925 by josep puig i cadafalch.

there are many legends concerning the mountains and monastery of montserrat. one of them tells that in the year 880, on a saturday night when the sun was going down over montserrat, some boy shepherds saw a bright light coming down from the sky, accompanied by beautiful music. the following saturday they returned with their parents, and the vision came to them again. on the following four saturdays the rector of olesa went with them, and everyone saw the vision.
as soon as he heard about what had happened, the bishop of manresa arranged a visit. a grotto was seen where the image of the holy mother of god was found. the bishop suggested that the image should be taken to manresa, but as soon as it was lifted up, it became so heavy that it could not be moved. the bishop interpreted this as the manifestation of the will of the virgin to stay in that place. he ordered a chapel to mary to be built, and that she should be worshipped on the mountain of montserrat. the cult of the statue of the virgin, familiarly called “moreneta” (black madonna) because of its dark color, is the most popular cult in catalunia. the statue is a wooden figure and its color is the result of a transformation of the varnish over time.

besides its mission of maintaining the mountain as a center of reunion and prayer, the montserat area is also known for its cultural presence by having a library with at least 300,000 volumes, a museum with works of renowned artists such as el greco, picasso, and salvador dali, and a boys’ choir considered the oldest continuous children choir in europe. excluding certain holidays, this choir gives a free daily performance at the basilica at 1.00 pm, offering interpretations of gregorian songs and music of other religious genres.

active in the great outdoor playground

about two million visitors each year come to the mountain as religious pilgrims, but even if you are not religious, montserrat is a place where a spiritual revelation of some kind is almost guaranteed. as the beating heart of catalonia, it is just that special. for many people, the great outdoors is a place to unwind, de-stress and escape the daily grind. the montserrat area provides space for recreational activities such as hiking trails, picnicking in the sun, climbing up mountain walls and doing great landscape photography.

there are a number of open trails inbetween its magnificent geological features. over a thousand years ago, hermit monks walked the same paths that still crisscross up the mountain today. when stepping on the mountain, you can feel the history in the air and the soil. each path leads to a natural or historical wonder with views to satisfy any explorer. the wide varieties of stunning paths on montserrat mountain vary in length and difficulty. this makes it perfect for any traveler, whatever their hiking skill level might be. with numerous sets of steep rock stairs and paths that scale the side of the mountain, experienced hikers will find a challenge, while for new adventurers there are numerous short, shaded paths that encourage meditation, without working up too much of a sweat. you can explore the mountain above the monastery on a web of paths leading to some of the peaks and to 13 empty and rather dilapidated hermitages. the funicular de sant joan will carry you up the first 250 m from the monastery. if you prefer to walk, the road past the funicular’s bottom station leads to its top station in about 45 minutes.

from the top station, it’s a 20-minute stroll (signposted) to the sant joan chapel, with fine westward views. more exciting is the one-hour walk northwest, along a path marked with some blobs of yellow paint, to montserrat’s highest peak, sant jeroni, where you can see spain glimmering in the sun in all directions. the walk takes you across the upper part of the mountain, with a close-up experience of some of the weird rock pillars, all named. not only hikers get their satisfaction but also climbers attracted by the magical blunted pinnacles of montserrat. although the cliffs may appear chossy, the rock is generally very solid and highly featured, with many protruding knobs and sinker pockets. routes range in difficulty from 3rd class scrambles to 5.14c via ferratas . lengths range from the ridiculously short 2-bolt power route to multi-pitch adventures comprising 10 pitches. being the original route and a historical accomplishment, the normal route on cavall bernat is the easiest way to the summit of this fine spire. this route is a classic, moderate one with airy and enjoyable climbing on the shortest side of the peak. 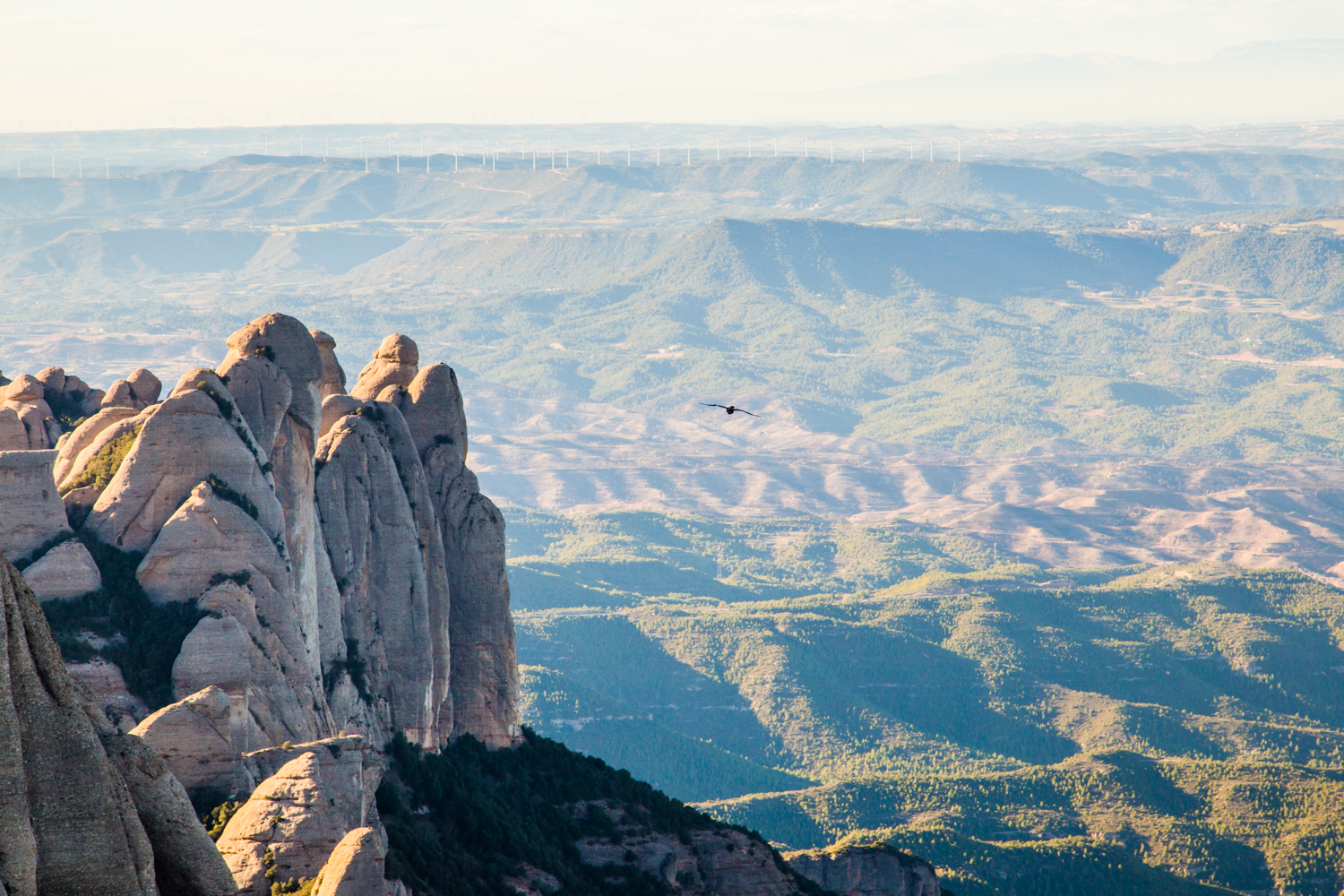 there are a number of refuges in the park that provide cheap accomodation for climbers and hikers who want to stay overnight. the monastery also offers rooms and a campground.

from barcelona is very easy to travel to montserrat, taking the train at plaza españa up to the base of the mountain, where you can take the cable car to the monastery. the ride itself is breathtaking but fairly intense. if you are afraid of heights, you might want to take the rack car.